You are here: Home / Money Talk / Compound Interest…the Eighth Wonder of the World

A Facebook friend shared this article, which says if a 20 year old with nothing in the bank can start saving just $2 a day until they are 65 years old they can accumulate one million dollars assuming they get a 12% annual return. Just TWO LITTLE DOLLARS A DAY!!

Now, if you know anything about investing, an annual return is not guaranteed, and assuming an average return of a 12% is pretty optimistic. But, the point is you gotta start somewhere, and the the sooner you start the less you need up front. So if you’re like me, and are about 20 years away from being 20 years old, you’re gonna have to start with A LOT more…you’re gonna need $20.55 a day and a lot of luck in the market!

If you can teach your child anything about investing, start with compound interest.

The sooner you start, the better.

Show and discuss savings calculators such as this savings calculator by Bank Rate. I’ve always been slightly obsessed with savings calculators. It’s soooo much easier (not to mention accurate!) than a pen and paper and calculator. (Yeah, I did that a lot before we had the internet…gasp!) I love figuring various scenarios for investing, or when it came time to purchase my first car, house, etc. =) Can’t help it, I’m a number cruncher.

Side Note: I have provided Amazon affiliate links below for your reference and convenience. If you choose to purchase anything using my links I will earn a small commission (at no additional cost to you!) which is used to support this blog, but you are in no way obligated to use my links! =)

Like many kids, I was interested in money at a very young age. (Who didn’t love getting birthday cards with cash?!) I don’t know exactly how young I was when I became interested in investing. Not sure I even had a job when I bought my first book about money, The Complete Idiot’s Guide to Getting Rich. So I couldn’t have been more than 12 or 14 years old. (I probably bought it with money saved from those birthday card dolla dolla bills, yo!)

Some of the chapters were a challenging to understand until I was a little older, but I remember it was my first introduction to compound interest, and I was stunned.

According to Einstein, “Compound interest is the eighth wonder of the world. He who understands it earns it…He who doesn’t…pays it.” #truthbomb

Do you understand compound interest? If not, NOW is the time to learn!
Seriously, the “Time is money” quote has never been so true.

Would you rather have $1 million dollars, or the sum of a penny doubled every day for 30 days?

In the Idiot’s Guide there was a “would you rather” question…would you rather have $1 million dollars, or the sum of a penny doubled every day for 30 days?

Have you heard this before? Which would you choose?

If you chose the penny option at the end of the month you would have over $10 million dollars. Check it out: 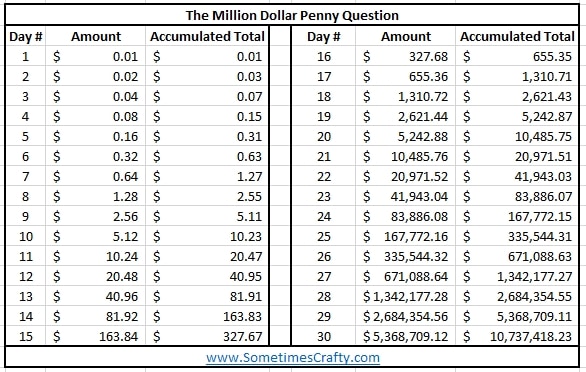 I was fascinated by the power of money. Or rather, the power of SAVING money, and letting your money work for you. I think this can be a difficult concept for kids, but to get the wheels turning perhaps you could do a challenge of your own on a much smaller scale…maybe offer your child the choice of $5 or the sum of a penny doubled every day for 10 days. I would venture a guess *most* kids are going to skim over the “sum of a penny doubled” part and be like “a penny a day?? I’ll take the 5 bucks, that’s obviously more!” We’re hoping they go that route, otherwise it’s not as entertaining. =)

It’s not as mind blowing as 10 million dollars, but at the end of 10 days they would get $10.23, which is more than double the $5. (And I’ll save the opportunity cost and future value of money calculations and discussion for another day! HA!)

Anyhow, hopefully you see the importance of teaching your kids about compound interest, and you can get them to starting thinking about how it all works. And if by chance you’re someone who is paying it and not earning it, it’s not too late! Let this be the motivation you need to tip the scales in your favor!

What are some of your early memories of money and financial knowledge? I would LOVE to hear your stories!