This little gem recently made an appearance at 2013 CES and is getting a mixed response. My opinion – GENIUS!!!! When and where can I get one?

Of course, the timing is almost perfect, actually just a tad too late for us. We started potty training (seriously) about a week ago and the iPad has been extremely helpful in that task. Let me back up a bit and tell you how our potty training journey actually began.

Last year around this time my oldest daughter (18 months at the time) had started to show interest in potty training. She followed us to the restroom, asked questions, wanted to flush the toilet, etc. She knew when her diaper needed to be changed and would tell us. Potty training was completely new to me, and I realize 18 months is a bit early to have high hopes. But it does happen. I have a few friends who have trained their children before 20 months. I thought my daughter was showing enough interest to at least try.

Elmo was pretty much her favorite person at the time so the next time I was at the store I bought an Elmo potty and subsequently bought the Elmo Potty Training DVD a little later at the suggestion of a friend. I found a pin to this site on Pinterest about how one lady trained her children in ONE DAY. Now, I did NOT expect to have her trained in one day but I rounded up all the candy and treats and stickers I had, and figured it was worth a shot.

At the suggestion of my former Mary Poppins (awesome daycare provider) I let Kayden run around the house in just underwear or, in the buff, which is usually her preference, and I covered the floor with just about every towel and blanket we owned. We talked about using the potty but I waited for the first accident as I pumped her full of liquids. She had a few accidents as expected but I did get her to at least sit on the potty. It didn’t even occur to me to give her the iPad at the time, as she hadn’t yet been introduced to it. Instead, we sat the potty in front of the TV hoping she’d sit and pass the time until it was time to go.

She kept telling me she went when she hadn’t and then when she actually DID go I totally missed it and dropped the ball on making a HUGE deal and celebrating immediately after. Felt like the worst mom ever. Seriously, ever. =( The rest of the day was a combination of accidents and her going a couple drops, but I felt like we were at least had officially started training. I was doing load after load of laundry and when my husband came home from work I told him the next accident was his chore. Guess when she decided to go #2?! LOL That pretty much did it for him, he immediately grabbed a diaper. I hadn’t expected him to give in so quickly and I was very frustrated, having just spent a very long day making what I felt was progress, albeit, small.

I made the mistake of mentioning my frustration on Facebook to my friends and family, most of whom immediately told me it was too soon, she was too little, I was scaring her, etc. My frustration was not that it didn’t happen in one day, my point was that we needed JOINT cooperation and couldn’t expect her to understand or cooperate if one parent was trying to potty train and the other was still using diapers. So I decided to just drop it and try again another time.

Fast forward to present time. My husband and I had decided it was time to get serious. BOTH of us. Since he was taking vacation from work between Christmas and New Year that should give us plenty of time to stay home and work together on this task. Then as luck would have it we all came down with the flu. =(

Once we all got healthy we gave it a few more days and began. We had asked for these awesome training pants from an Etsy seller for Christmas. (If you’re a sewer she even has a tutorial on how to DIY. I was going to make some but didn’t have time. Plus, she did a great job, mine would not have been made so nice I’m sure. LOL) Armed with a a pile of the training pants, multiple packs of flushable wipes, a big jar of M&Ms, fruit snacks, and the iPad we started bribing her with no shame.

The first couple days were torture. Pure torture. I don’t mind the wetting the pants part, but cleaning the mess of dirty pants & clothes repeatedly really got to me. (I used several batches of homemade OxyClean to soak her clothes and remove the stains. Thankfully it worked very well!) I thought this process may never end. Honestly, I’d rather go through labor again than potty train and the idea of having to potty train another child is really putting a damper on the idea of having a third child. It was that bad.

We quickly learned that bribes worked nicely. She could sit and use the iPad on the potty as long as she wanted and she would get treats when she was successful. She wanted chocolate so badly and the iPad helped her pass the time and sit quietly. If she had an accident then she did not get to play with the iPad, or the TV got turned off or something.

So it’s been about a week and things have been going great. She’s only had a few accidents during the day and one during the night. We just moved the potty from the living room to the bathroom and have started having her use the big potty. She wakes up in the morning and tells me right away when she wants to go. Plus, she will go on her own throughout the day yelling, “You did it!” when she’s done. =) I’m happy that the bribes have drastically decreased, and she doesn’t ask for a treat EVERY time, so I don’t regret using those tactics at all.

We have yet to venture out in public and try to potty, but I think we have a good start at least. Just like surviving any other terrible thing in my life, looking back it wasn’t all that bad. I suppose having a third baby isn’t ENTIRELY out of the question now. LOL But I’m pretty sure when our second child starts training (in another year or so) we will own an iPotty no question. 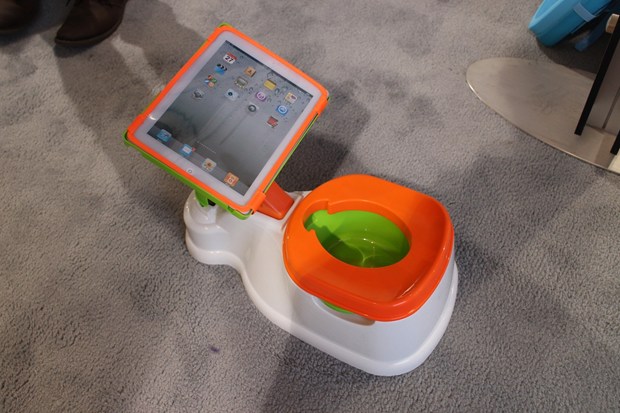 Do you like the idea of an iPotty, or are you against it?